The Pelican Nebula (IC 5070), is another one of Milky Way’s stellar nurseries. It earned the name due to its shape when viewed in the visible spectrum, such as on this photo: the shape is defined by border of cold, dark gas where it meets the visible (ionized) gas. This border pushes outwards constantly: the IC 5070 is quite dynamic in terms of star formation and movement of the large regions of H II gas, so that the configuration of material will look quite differently in the relatively near future (measured in tens of thousands of years).

The photograph below is made in narrowband, which reveals more information as it features the photonic emissions in specific spectral lines, with such emissions being abundant in the gas that builds up the nebulous formations. The huge cloud of hydrogen gas and cosmic dust that the Pelican Nebula belongs to is just a part of a larger cloud which also contains the North America Nebula, also named due to its shape, like the vast majority of objects that have a discernable shape in the skies (and following a long tradition to do so).  North America and Pelican are separated by a large dark molecular cloud designated L935.

IC 5070 is located in the constellation of Cygnus, near one of the brightest stars on the night sky: Deneb. Its most prominent feature of IC 5070, shown in yellow in the image below, has its own catalog designation: IC 5067. It’s a star-forming region some 10 light years across and features couple of prominent filaments of colder gas, themselves having a separate designation Herbig-Haro 555 (HH 555). 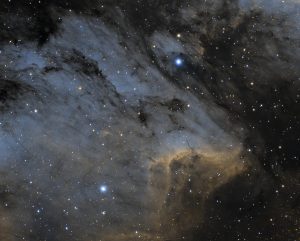 This photograph was made with the use of narrowband filters.
Narrowband Information was mapped to RGB (with a modified Hubble Palette).
Luminance information was synthetized from narrowband.