Outters 4 (Ou4) is a very mysterious object, not only because it does not have its own wikipedia page in English. Colloquially called a Squid (or a Giant Squid) Nebula it was discovered only in 2011 by a French amateur astronomer Nicolas Outters (thus it’s formal name is Outters4 or Ou4) — with the same telescope that the image below was taken.

It seems that Ou4 is not a planetary nebula, but a more exotic structure (as a result of a bipolar outflow). It is possibly emitted from the star in the center of it, which is actually a triple system of stars (HR 8119), but it may be a result of as yet undiscovered protostar or a post-AGP star. The object is very faint and shows up only when photographed for a exposure time through an OIII filter and is, therefore, usually represented in a greenish or bluish (or teal) tone, per the usual convention in mapping the narrowband information to a visual image. Ou4 occupies a relatively large portion of the night sky (2.5 full moons).

Ou4 ‘lies’ in the larger surrounding nebula which is sometimes called a Flying Bat Nebula, cataloged as Sharpless 2-129 or Sh 2-129 (Sharpless being a catalog of H II emission objects, created by the astronomer Stewart Sharpless). Ou4 and Sh 2-129 are not in the same place just from our visual perspective, it appears they are really in the same region, some 2,300 light years away from us, which would make Ou4 some 50 light years long and created some 90,000 years ago. 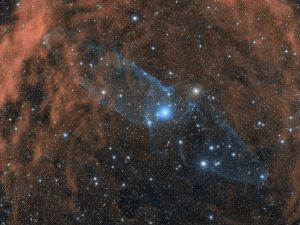