The Whirlpool Galaxy, a spiral galaxy in the constellation of Canes Venatici, is some 23 million light years away from us and some 76,000 light years across. It’s not visible by a naked eye but can be easily observed by binoculars and any-sized telescope. This deep space object has been extensively studied and it’s the first galaxy to be classified as a spiral galaxy (in 1845). It was discovered in 1773 by Charles Messier who added it in his catalog as M51.

M51 has a companion galaxy, a dwarf galaxy (apparently irregular) with a a designation NGC 5195 (or M51b) visible in the upper left corner of the picture. A huge bridge of dust and gas connects the two galaxies together, which is also visible on this image as a ring of dust. The two galaxies have already passed each other once and will continue to oscillate and merge. The pair is a great example for learning more about galactic interactions.

The center of the Whirlpool Galaxy is believed to have a supermassive black hole and is quite active. The galaxy appears to be undergoing a new period of enhanced star formation, which is estimated to last millions of years, which has been initiated due to the galactic merger. 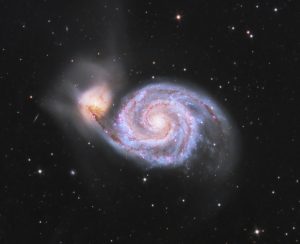