The Orion Nebula (M42 or NGC 1976), the colorful giant, got the distinctive honor to be designated the number 42 in the Messier catalog. M42, looking like a fuzzy star, can be seen by the naked eye in the middle of Orion’s sword just below Orion’s belt (Orion’s belt is one of the most recognizable configuration of stars, easily visible during a clear winter night in the northern hemisphere, even from cities with light pollution).

Being just some 1,400 light years away from us, it is the closest stellar nursery — this being one of the reasons why it is also one of the brightest deep space objects.

M42 is a diffuse nebula, both reflecting and emitting, and without well defined borders. It is also quite colorful and is thus sometimes called the Jewel of Orion: the red is result of the ionization of atoms in the H II regions, while the bluish tones come as the reflected radiation stemming from the numerous massive young O-type stars at the M42’s core. M42 contains mostly hydrogen, both in ionized and neutral state, but also oxygen.

M42 is one of the most observed and analyzed deep sky objects. Hundreds of individual stars in various stages of forming were observed and reported on, up to date. 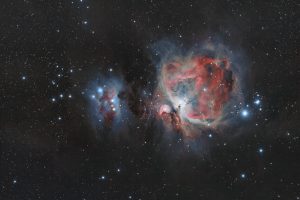 Data and processing: Goran Petrov
License: Creative Commons BY NC (free for non-commercial use, with attribution).
Click on the image to view it in full size.