The Heart Nebula (IC 1805, Sharpless 2-190, aka Running Dog Nebula), shown on the photograph in the lower right, and the Soul Nebula (Westerhout 5, IC 1848, Sharpless 2-199, aka Embryo Nebula) are located in the Perseus Arm of the Milky Way, some 6,000 and 6,500 light years away, respectively, and are together almost 600 light years across. They are two red nebulae (in visible spectrum) close enough to be considered together. They cover a patch in the sky that is 10 moon diameters wide (five degrees), located in constellation Cassiopeia in Earth’s night sky but cannot be seen with a naked eye.

The two featured nebulae are extensive star-forming regions and most of the already formed stars are much younger than our 5-billion years old sun. NASA’s WISE image makes it possible to see that the cooler clouds extend much further where dust is just beginning to collect under its own gravitation. The Soul nebula is an excellent example where star-forming is accelerated due to radiation (solar winds) from the most massive stars within the clouds that pushes and compresses the molecular clouds together (triggered star-formation). Consequently, the newly created young stars start themselves pushing the gaseous material, creating cavities around them and creating intricate forms in the nebulae.

The heart of the Heart Nebula is a open cluster of young stars (referred to as Melotte 15) which can be observed and photographed with a larger-power telescope. Melotte 15 is separately featured on this website here. 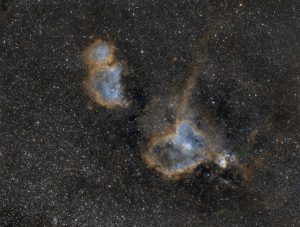 Data and processing: Goran Petrov
Image license: Creative Commons BY NC (free for non-commercial use, with attribution).
Click on the image to view in full size.

This photograph was made with the use of narrowband filters.
Representational color image: narrowband Information was mapped to RGB using a modified Hubble Palette.
Luminance information was synthetized using narrowband data.